This is a plain English summary of this paper.

Some words sound like good matches for the things they mean.

Some examples are obvious–the word meow actually sounds like what it means (a cat meowing).

Others examples are more subtle. Take the word balloon for example. Can you imagine that word meaning “a sharp jagged rock”? That seems strange doesn’t it? There is something soft and round about the sound of balloon that matches its meaning. Of course, you might say “I only think that because I KNOW balloon means something soft and round”. Well, that’s probably true in part. But, it’s also true that people around the world associate sounds like /b/ /l/ and /n/ with soft, round, things. This is an effect called sound symbolism: when certain sounds just seem appropriate for certain kinds of meanings.

Some studies have gotten people to rate words as being arbitrary or iconic. They found that English words vary, with some being rated as very arbitrary (like jail, argue or lung) while others were rated as being very iconic (like click, crisp or juicy).

We know from previous research that iconic words are easier to learn than arbitrary words. This begs the question: why aren’t all words iconic?

Let’s imagine for a second what language would be like if every word was iconic. Take these fruits for example. 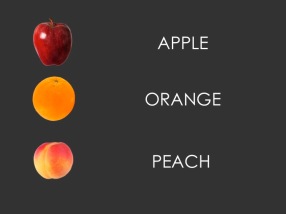 They all have pretty arbitrary names: there’s nothing about the word apple that really sounds like the fruit it refers to.

Now, remember we said that sounds like /b/, /l/ and /n/ were associated with soft round things. So, if these fruits were named iconically, we might end up with them having names like this. 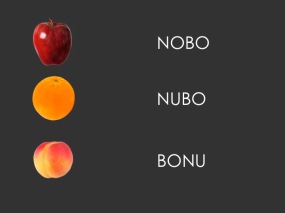 As appropriate as these words might be, you can imagine why this would be an issue. Here we have three pretty similar meanings, being called three pretty similar things. Imagine being in the produce section and asking someone to hand you the nobo, there would probably be many times when you’d get a nubo, or a bonu, instead.

So far so good? Iconicity would lead to ambiguity because all round things would be called words that sound appropriate for round things, leading to confusion when everything round ended up with a similar sounding word. (And it goes beyond roundness. Some sounds in language sound appropriate for small things, some for quick things, and on and on.) 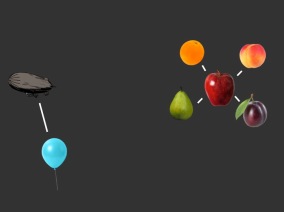 Looking at the image, you can imagine that if all of those fruits had names that sounded appropriate for their meanings, you’d run into issues. But, if balloon had a name that sounded like it’s meaning, you’d probably be okay. Because it doesn’t have as many semantic neighbours, it can be iconic without risking confusion with them.

That’s what we set out to test. We looked to see if the number and closeness of a word’s semantic neighbours predicted how iconic it was.

(How did we quantify the number of semantic neighbours of each word? It had been done in a previous study. Essentially, the authors looked to see what words tend to appear around a certain word. You might imagine that dog would appear along with words like cat, fur, play, etc. If a pair of given words tend to appeaer along with similar words, they’re probably related in meaning, and were considered semantic neighbours.)

What does this mean in the grand scheme of things? Some people have suggested (reviewed here) that language may have begun by containing many iconic words. When humans first paired sounds with meaning, it probably helped if there was some special link between the two, to make that link easier. But, as languages became larger, the theory goes, they were forced to become more arbitrary, to avoid the sort of confusion that we’ve been talking about. Our findings fit in perfectly with that idea, by showing that denser semantic neighbourhoods tend to lead towards arbitrariness.

The paper contains many other findings, including a look at differences among word types and the idea that words with more sensory features tend to be more iconic.